If you are wondering what God thinks about abortion, look no further than the incarnation… when God Himself entered the world as an embryo.

Think about that for a moment.

Jesus Christ, the prenatal deity, entered human history in a uterus for the purpose of redeeming human beings from sin.

Mary, a scared, unmarried teenager fits the perfect profile of so many young women today who are told they must abort their unborn child in order to save their own futures.

Thankfully, that was not God’s message to Mary. His will was for the life of the child – and subsequently for all who would find everlasting life through Him.

So this leads to the question of what we as Christians need to do about abortion in our country.

Because it is no accident that you are living in this precise cultural moment. God has placed you here.

From one man he made all the nations, that they should inhabit the whole earth; and he marked out their appointed times in history and the boundaries of their lands.

If God put you here in America, at this point in history, it’s because He wants to use you for His Kingdom and purposes.

Proverbs 31:8 says we are to “Speak up for those who cannot speak for themselves, for the rights of all who are destitute.”

The unborn cannot speak for themselves, so we must raise our voices for them to protect their right to life. And we do this in response to what Christ has done for us.

When we were lost in sin, unable to approach God and speak for ourselves, Jesus became our advocate – one who speaks for someone else – and pleaded our case before the Father.

Pro-life engagement and pro-life faithfulness, therefore, are simply the proper response of our heart to the Gospel.

If we are going to be a voice for the unborn, we need to know three things.

It’s critical that we know what we believe about abortion and about human life if we’re going to defend the rights of the unborn from those who are pushing the abortion agenda.

And we must know what we are actually facing – not just a culture war but a spiritual battle.

Finally, we need to understand what our response as Christians, and as the Church, needs to be on this, arguably the most important issue of our time.

As Christians we could make many biblical arguments against abortion – how we’re knit together in the womb (Psalm 139) or how John the Baptist leapt in his mother’s womb when Mary, pregnant with Jesus, came to visit Elizabeth, to name just two examples.

But we don’t need to make a biblical argument. We can make a statement that so many on the other side have used on other issues…

We believe in the science of embryology which states that from the time of conception, we are distinct, living, and whole human beings.

You’ll find those words in any embryology textbook on any college campus today. It’s not just Christian rhetoric… it’s science.

Let’s look at each of those three qualifiers. From the moment of conception, you are…

Distinct: A fetus is a distinct human being. That means it’s an entirely separate being from the mother. A body within another body. So the “my body, my choice” argument falls apart, because abortion is the destruction of a distinctly different body from the mother.

Living: Living things grow. An unborn child is a living being because he or she grows in the mother’s womb. After a baby is conceived, it develops independently of any action on the part of the mother or father.

Whole: It’s important to make the distinction here that whole is not the same as fully developed. A baby will continue to develop, but it already has everything necessary to become what it is going to be. Abortion proponents will try to call a fetus a potential human being. An unborn baby is not a potential human but a whole human full of potential.

This is what we believe as pro-life supporters of distinct, living, whole human beings. Equip yourself with this knowledge so you can speak boldly for the pre-born.

2. What we are facing

We must understand that the issue of abortion is a spiritual issue disguised as a culture war.

Our enemy, the devil, wants to destroy what God has created. And snuffing out the lives of babies that are created in God’s own image is what he is after with abortion.

Abortion is the pagan replacement for man’s pursuit of eternal life. Not only are women aborting children to keep the life they want for themselves, but science is using and killing the unborn to extend human life. We are trying to play God.

“Abortion is the Antichrist’s demonic parody of the Eucharist. That is why it uses the same holy words, ‘This is my body,’ with the blasphemously opposite meaning.”

This is a spiritual battle, which brings us to what we must do.

Dietrich Bonhoeffer said “Silence in the face of evil is itself evil.”

We need to understand that abortion was only made possible in this country because the Church abdicated our spiritual duty to influence government for God’s purposes.

Again, I’ll remind you of Proverbs 31:8. We are to speak for those who can’t speak for themselves.

It’s not enough to be against abortion but remain silent and passive; this is complicity.

Arm yourself with knowledge about what you believe, recognize that this is a spiritual battle, then raise your voice and speak for the unborn.

When the Church stands up with the power of the Holy Spirit, Satan sits down.

But we must take that stand. 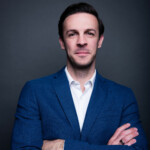 Seth Gruber, a contributor of TPUSA Faith, is a professional public speaker focused on equipping Christians and pro-life advocates to make a gracious, winsome, and persuasive case of their pro-life beliefs in the public square. His approach, while not shying away from the moral question of abortion, focuses on giving you the tools you need to effectively and lovingly engage your co-workers, friends, and family members on the issue of abortion. You can find more from Seth here.